We often find in various sermons in Nahjul Balagha an emphasis on holding onto and taking knowledge from Ahlulbayt. However, we find that these statements, when examined carefully, contradict elements of Shia ideology. One such example is the following sermon: 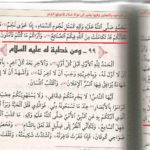 “The family of Mohammad – peace be upon him and his progeny – are like the stars in the sky, if a star was to no longer become apparent, another would take its place, it is as if Allah has perfected his blessing for you and showed you what you wished for.”

The sermon is clear that there is no such thing as ghaybah (occultation). This indicates that Ali was not aware of the concept that would one day spread and be adopted by Shias all around the world.

Truly, if we were to even contemplate upon the hadith of Al-Thaqalayn, we would be less accepting of the concept of Ghaybah. How can man be ordered to hold onto the teachings of a non-accessible hidden Imam in the first place?