In continuation of the previous article in which we have listed some of the praise of Ali towards the Muhajireen and Ansar, in this article, we shall expand by listing a couple of examples in which Ali condemns his companions while praising the companions of the Prophet – peace be upon him – .

In Sermon #56, Ali bin Abi Talib says, “In the company of the Prophet of Allah – peace be upon him and his household – we used to fight our parents, sons, brothers and uncles, and this continued us in our faith, in submission, in our following the right path, in endurance over the pangs of pain and in our fight against the enemy. A man from our side and one from the enemy would pounce upon each other like energetic men contesting as to who would kill the other; sometimes our man got over his adversary and sometimes the enemy got over ours. When Allah had observed our truth, He sent ignominy to our foe and sent His succor to us until Islam got established (like the camel) with neck on the ground and resting in its place. By my life, if we had also behaved like you, no pillar of (our) religion could have been raised, nor could the tree of faith have borne leaves. By Allah, certainly you will now milk our blood and eventually you will face shame.”

Commentary: Ali bin Abi Talib, in the above sermon, is referring to two groups of people. It goes without saying that the first group is referring to the companions of the Prophet – peace be upon him – for those that aided him in battle were none other than his companions. The second group, which he reprimands, is his own companions.

In a very powerful Sermon #96, he says, “O’ people of Kufah, I have experienced in you three things and two others: You are deaf in spite of having ears, dumb in spite of speaking, and blind in spite of having eyes. You are neither true supporters in combat nor dependable brothers in distress. May your hands be soiled with earth. O’ examples of those camels whose herdsmen have disappeared, those that are collected together from one side and disperse from the other. By Allah, I view you in my mind in that if war becomes intense and in full swing you would flee away from the son of Abi Talib like the woman from her reproductive organs (at birth).” 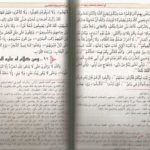 He then continues to say, “I have seen the companions of the Prophet – peace be upon him and his household – and I do not find anyone from you resembling them. They began the day with dust on their heads and passed through the night in prostration and standing in prayers. Sometimes they put down their foreheads and sometimes their cheeks. With the recollection of their resurrection it seemed as though they stood on live coal. It seemed that in between their eyes there were signs like knees of goats, resulting from long prostrations. When Allah was mentioned their eyes flowed freely until their shirt collars were drenched. They trembled for fear of punishment and hope of reward as the tree trembles on the day of stormy wind.”

For more on this topic review our commentary in the footnotes of our Saheeh Nahjul Balagha PDF English.