When the rebels gathered to Ali bin Abi Talib and condemned Uthman, they made Ali an ambassador upon them and asked him to rebuke Uthman in their place.

Ali then approaches Uthman and rebukes him in a way that is shocking to Shias, for his rebuking entails that he is equal to Uthman as we can see in the scan and the translation of the sermon below. 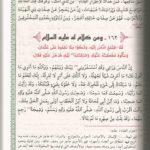 He said in Sermon #162, “By Allah, I do not know what to say to you! I do not know of a matter that you are ignorant of and cannot point you to a matter that you are not aware of. You know what I know. I did not precede you to anything nor was I told of anything in private to tell you of it. You saw what I saw. You heard what I heard. You were a companion of the Prophet – peace be upon him – in the same way that I accompanied him.”

The words of Ali speak for themselves and do not require commentary. Ali is not someone that had secret knowledge that was not accessible to other companions. He confirms that he was a close companion of the Prophet – peace be upon him – and attained the knowledge that other major companions attained.

Another interesting lesson that can be learned from the sermon is that it also implies that Ruqayya and Um Kulthoom were indeed the daughters of the Prophet – peace be upon him – and it suggests that their marriage to Uthman was a merit for him. Ali says, “You are closer to the Prophet – peace be upon him – than them in blood, and you have attained in kinship through marriage what they did not attain.“