In the very first sermon in Nahjul Balagha, we find Ali bin Abi Talib – may Allah be pleased with him – describing the angels. Interestingly, his description clearly implies that the throne of Allah is a tangible creation and is not the “concept of knowledge” or other metaphors that Shias try to suggest that it is. 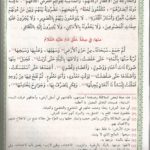 Ali says while describing the size of some of the angels:

“Among them are those also whose steps are fixed on earth but their necks are protruding into the skies, their limbs are getting out on all sides, their shoulders are in accord with the columns of the Divine Throne, their eyes are downcast before it, they have spread down their wings under it and they have rendered between themselves and all else curtains of honour and screens of power.”

The first sermon clearly suggests that the Throne is indeed tangible and has a location.

The reason that Shias usually deny the tangibility of the Throne is because affirming it may lead them to affirming a place/location for Allah. However, the description provided by Ali in the quote above makes it hard for Shias to deny the existence of a literal Throne.