To completely understand the problems of Ali’s alleged divine appointing; we need to first understand how he dealt with the political changes of his time.  His contradicting reactions show that he was only a pious man that wished the best for the ummah, not that he had a divine position that was required to be fulfilled.

In a twist to the alleged divine appointing, we find Ali bin Abi Talib rejecting a call to his caliphate. Before presenting the text, we would first like to remind Shias that Ali had a change of heart on more than one occasion. He was initially disappointed when he did not acquire the caliphate after the death of the Prophet – peace be upon him – . He did not make any attempts to rule during the first two caliphates. However, after the passing away of Omar, he willingly took part in the elections, as opposed to forfeiting in the way other candidates forfeited.

After Ali lost the elections, he completely gave up on the caliphate.

In Nahjul Balagha, we find evidences of his apathy towards calling to himself and to taking a position of rule. He says in Letter #54 (293) to Talha and Al-Zubair, “I did not want the people until they wanted me and I did not pledge to them until they pledged to me.”

This clearly goes against his nature when he took part in the elections after Omar passed away. 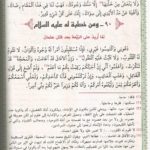 “Leave me and seek someone else. We are facing a matter which has (several) faces and colors, which neither hearts can stand nor intelligence can accept. Clouds are hovering over the sky, and faces are not discernible. You should know that if I respond to you I would lead you as I know and would not listen to the utterance of any speaker or the reproof of any reprover. If you leave me then I am the same as you are. It is possible I would listen to and obey whomever you make in charge of your affairs. I am better for you as a counselor than as chief.”

These golden words very vividly show that Ali no longer is interested in ruling the Muslims. He would rather serve in the same way he was known to, by advising the caliphs. Again, he contradicts his nature in the previous election.

We come to the conclusion that emotions led Ali to react differently throughout the years after not being able to achieve the top position of Caliph. His reactions and words clearly show that he is a pious man that at the end was no longer interested in ruling, and more importantly, was not divinely appointed.