In one of the more heartwarming letters in Nahjul Balagha, we find a caring father Ali bin Abi Talib advising his son Al-Hasan after a life full of experiences and hardship. The letter to Al-Hasan include pearls of wisdom, however, it also includes evidences that Shiasm is built upon false ideologies.

“Therefore, plan for your place of stay and do not sell your next life with this world. Give up discussing what you do not know and speaking about what does not concern you. Keep off track from which you fear to go astray because refraining (from moving) when fear of straying is better than embarking on dangers.”

He also says later in the same letter: 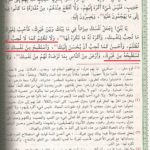 The letter pretty much contains similar fatherly advice throughout.

As the text implies through, Al-Hasan was not an infallible. If he was, his father would not have to warn him about not going astray or treating others well. His warnings about only speaking in matters that he knows of also contradicts Shia concepts about the limitless knowledge of the Twelve Imams.