Perhaps one of the most notable Shia practices today is what we find during the Ashura and Arba’een mourning processions. The excessive wailing and self-flagellation has not only caused a mockery of Islam in the eyes of the rest of the world, but also led to severe injuries and the spreading of diseases. Perhaps if Shias spent more time reading Nahjul Balagha, they would realize that these actions are frowned upon.

Ali bin Abi Talib in Saying #144 said, “Endurance comes according to the affliction. He who beats his hand on the thigh in his affliction ruins all his good actions.”

After Siffeen, when he found women crying over the dead, he said in Saying #324 to a leader of a tribe, “Have your women gotten the best of you? Do you not refrain them from this crying?” 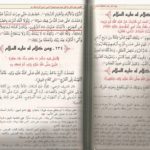 In Sermon #233, Ali bin Abi Talib during a eulogy for the Prophet – peace be upon him – , “If you had not ordered endurance and prevented us from bewailing, we would have produced a store of tears and even then the pain would not have subsided, and this grief would not have ended, and they would have been too little of our grief for you.”

If this is the position of Ali bin Abi Talib concerning the tragedy of the death of the Prophet – peace be upon him – himself, which is the greatest tragedy, then one comes to the conclusion that one should endure all tragedies, instead of establishing mourning processions.