The bravery of Ali bin Abi Talib has been so widely exaggerated by Shias that it has reached mythological proportions. We find fabrication upon fabrication of his heroism in battle in the form of him single-handedly defeating thousands and demon vanquishing.

However, when we look into Nahjul Balagha, we find a fascinating quote by Ali that describes him as the exact opposite of the mental image that Shias have formed.

He said in Saying #9 (under the section of the words of wisdom that require an explanation) while describing warfare: 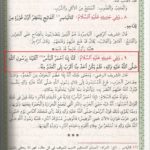 “When the crisis would turn red (in battle), we would seek the protection of the Prophet – peace be upon him and his progeny – for nobody was closer to our foes than him.”

It is interesting to see that English translations of the report translate it in a way that would make it appear that Ali does not show any sign of weakness. On al-islam.org, the translation provided is, “…we sought refuge with the Messenger…” which is very inaccurate, for the Arabic says:  اتقينا برسول الله, meaning, “…we sought the refuge of the Messenger…”

It is very obvious that this report was a great deal of embarrassment for the Shia translators.

The correct understanding of the report is that Ali temporarily sought the protection of the bravest warrior (the Prophet – peace be upon him – ) during battle before returning to form.

We would like to point out that Ahl Al-Sunnah do not believe that Ali was a coward. He was a brave warrior. However, if Sunnis read such texts with a darkened heart, one would easily come to the same conclusion that the Shias have reached about notable companions like Omar and Uthman.

May Allah cleanse all our hearts and give us objectivity and love for all those that served the Prophet – peace be upon him – by putting their lives on the line in battle.