In the fascinating Sermon #65 in Nahjul Balagha, we find Ali bin Abi Talib discussing the events of Saqeefah with the Muslims after the passing of the Prophet – peace be upon him – .

He said, “What did the Ansar say?” They replied “From you an amee 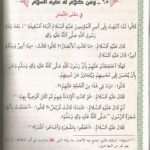 They asked, “How can this be used as evidence upon them?”

He replied, “If imamah was to be upon them, he would have not instructed that they would be taken care of.”

Ironically, this understanding can also be implied to Hadith Al-Thaqalayn, for the narration in Saheeh Muslim #2408 states that the Prophet – peace be upon him – said, “I remind you of my Ahlulbayt,” meaning: to take care of them.

In other words, if the wasiyyah to take care of the Ansar nullifies their claim to Imamah, then the wasiyyah for Ahlulbayt nullifies Ali’s claim as well.